Devstack is tooling for OpenStack to make it easy to bring up an OpenStack environment based on the latest git trees. It’s used extensively in upstream testing, and by many OpenStack developers to set up dev/test environments.

One of my personal challenges in working on Devstack was testing devstack itself. Relying on the upstream gate means we have a limited number of configurations, and when something goes wrong, iterating on a fix is hard. Even more importantly, the upstream gate is currently only a single node test environment.

A month ago I hacked out a new tool – devstack-vagrant (available on github). 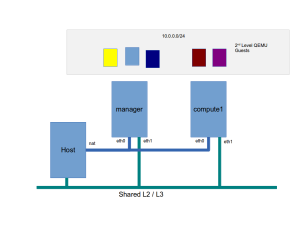 Devstack vagrant provides a customized Vagrant environment that will build a 2 node devstack cluster under VirtualBox. The basic model is 2 devstack nodes (a controller and a compute) that bridge through a physical interface on your host. The bridged interface is set as the default route in the nodes so that 2nd level guests created on top of this 2 node devstack can route to the outside world.

The nodes start and build from official Ubuntu 12.04 cloud images, and are customized using the puppet provisioning support in vagrant. There are a few config variables you need to set in a config.yaml, including hostnames, bridge interface, and the password hash you want your stack user to have. Basically enough to bootstrap the environment and then run devstack from upstream git.

I added a bit of additional logic to the end of the normal devstack process that includes installing an Ubuntu 12.04 and Fedora 20 cloud image in your glance, injecting the ssh public key for the stack user into the keyserver, and opening up ping and ssh in all the security groups.

I still consider this an expert tool at this point, as in, if it breaks you get to keep all the pieces. However, this has been useful to me so far, and given the pull requests I got the other day, seemingly is useful for others as well. Patches definitely welcomed. And if it looks like more folks want to contribute I’ll happily move to stackforge.

One of the things I’d love to do is sort out a functioning libvirt backend for vagrant (there are 2, they are both a little wonky) because then the 2nd level guests could use nested KVM and not be ridiculously slow.

This tool has already proved very useful to me, so hopefully it will be useful to others as well.