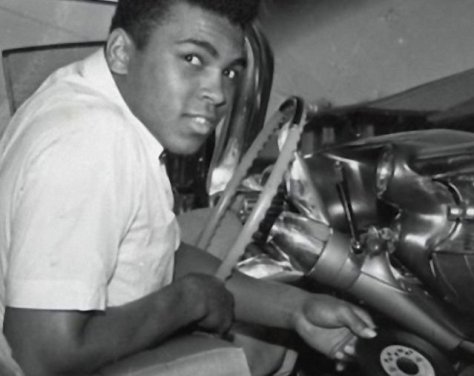 What’s the connection between the Beatles’ George Harrison, boxing legend Muhammad Ali, and Chrysler cars? The Highway Hi-Fi: a vinyl record player that just happened to be the world’s first in-car music system. It appeared 60 years ago this spring, in 1956, and should have been a smash hit. It was innovatory, a major talking point, arrived as the car market was booming as never before, and it came with much press hype. It also had the backing of a leading motor manufacturer. What could possibly go wrong?

It’s a fascinating story, made even more so because basically proprietary formats and copyright tangles killed it so quickly.

About a year ago, Susan and I went out to our old stomping grounds of Wesleyan University and saw the premier of Noah Baerman’s “Know Thyself”.  Susan and Noah met back in grad school, and Susan was renting an apartment from Noah and his wife earlier on when we were dating.  Susan said Noah was premiering a new work at Wesleyan, and we should make the trip out to see it.  It was something different, and I’d never actually seen Noah perform, so it sounded like a good idea.

The piece premiered in the second half of the performance, after intermission.  It ran about an hour, during which time I was completely mesmerized.  I can best describe it as a Jazz symphony, though I’m sure those words don’t do it justice.  I turned to Susan after the event and said “wow, I wish you’d told me in advance it was going to be this great, I’d have invited along some other folks”.

Now, I can share it.  Noah’s released a recording of the piece, which you can stream for free from his website.  I encourage you to take the time to check it out, I think you’ll find it well worth your investment.

The newest issue of the journal Intelligence has the largest review ever of research on the so-called Mozart Effect, the popular idea that listening to classical music can enhance the intelligence of people in general and babies in particular.

The review is titled “Mozart Effect, Schmozart Effect,” which should give you some idea of its conclusion: there ain’t no such thing.

But even if listening to Beethoven won’t make us smarter, the history of how the Mozart Effect ultimately became fashionable does have something to teach us. It’s a story about careful science, less careful journalism, and of course, death threats.

And so kicked off a decade of people believing that Mozart makes them smarter because people jumped far too early to broad conclusions based on a very simple very specific investigation.

Radio Paradise played this late this afternoon, and I was hooked.  You can even see it in clamation glory on youtube:

One of the constant tensions that exist is the new media age is between preservation of culture and copyrights. Personally this doesn’t get summed up any better for me than the fact that Schickele Mix is now lost to us.

Peter Schickele produced 175 episodes of a radio show that explored concepts in music in a very accessible way. I heard it by accident on our local NPR station 7 years ago, and fell in love with it. This was already during one of it’s many encores, as new shows had stopped being produced the last 90s. Even though I possess no real musical talent (or perhaps because of that), the show was facinating, and taught me incredible amounts about music. I only wished it was still running somewhere.

Because the show was about music, it played full length songs. The royalty rates for those on broadcast radio were something that was payable at the time, but those rates are substantially higher for online distribution. Hence, there are no archives, and a big piece of culture, one that could get people really excited about music, is now unpublishable due to copyright.

When I was in college, I was always fascinated by the fact that all that still remained of Ancient Greek Theater were 40 some odd plays. How could culture like that get lost? In a digital age it seems incredible that it would be possible to loose important parts of our culture.

For those that don’t know Jonathan Coulton (the man that brought use Code Monkey, Re: Your Brains, and The Portal Song) wrote a quite awesome song by that name. Listen to it here, though I’ll warn you it’s probably not safe for work.