Last summer about this time we made a big decision. We were going to work with Dandelion (a new geothermal company in the area) and replace all our Fuel Oil based forced air heating and hot water system with a Geothermal system. Instead of burning oil to heat our home, we’d use 1000 feet of water pipe, going up and down a  new 500 foot well to extract and compress heat from the earth.

How does Geothermal Heating work?

Once you get below 10 ft here in our corner of New York State, the ground temperature is about 50 degrees F. This is a giant renewable source where you can either extract heat (in the winter) or dump heat (in the summer), and it really doesn’t budge the ground temp. A compressor is used in the furnace to turn this 50 degree ground loop heat into 90 degree air in the winter, or 42 degree air in the summer.

The compressor is where all the energy is consumed. However,  moving heat is much more efficient than creating it, so heat pumps have efficiencies of over 100%. Typically ground source heat pumps will produce 4 – 5 units of heat for every 1 unit of electricity put in. For cooling it’s even better.

In the winter of 2016-2017 we spent about $2000 on fuel oil and service contract for our old system. That was based on a fuel oil price of about $1.90 / gallon as part of a really good group buy. It was also a relatively warm winter.

The new system went into place on Nov 22nd of 2017. Early in the heating season. This heating season included a 14 day cold snap starting at Christmas where it was 20 degrees below averages the whole time. Even with all of that our electricity add from the furnace was around $650 dollars for the winter (the Waterfurnace system we got has really detailed metrics in it that let me see it’s energy use). There is a harder to account for hot water heating part of the equation, especially as we also got an Chevy Bolt EV this year. Also the year in oil would have been much more than the year before (both in use and cost). But suffice it to say, we come out way ahead on operating costs no matter how you slice it.

Our June and July bills from Central Hudson are less than last years, even though it’s been a hotter summer, and we’re also charging an EV. It looks like for the month of July we’ll end up spending about $32 in electricity for cooling. Here is a graph of all the current number in kWh used. 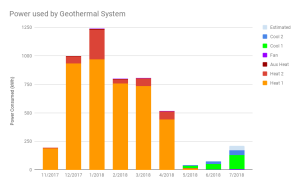 What else we love about the system

There are lots of qualitative things we love about the system as well. First of it so much quieter. It has 2 stages on both heating and cooling, and stage 1 (the more efficient) runs with a low fan speed that means unless you are in the room adjacent to the furnace it’s hard to know it’s running. This lower fan speed also does a much better job of pushing the heat out to the edges of the house. The whole house got much more consistent.

Getting rid of the fuel oil system means we no longer have a fuel oil tank in our basement of indeterminate age rusting away in the corner. There is no whiff of oil smell at times. The primary risk of carbon monoxide and potential fires in the house is gone. And that 700 gallons of fuel oil we used the last year is no more, which is 3.5 tons of CO2 emissions not taking place (the CO2 from the increased electricity we used in the winter comes to about 0.7 tons).

We installed a whole house humidifier along with it, so now can keep the house comfortable in the winter without filling humidifiers through the house.

And lastly, our screened in porch got so much nicer. The old AC compressor was right outside it, and loud. Now it’s in the basement and can’t be heard outside.

While I knew on paper that a ground source heat pump like this would be great, having never experienced one before I had this niggling concern all the way through the process in the fall. What would it actually be like?

It’s been amazing. At least once a week I have a moment about how great this new system is. The quiet, the comfort, the savings are all pretty amazing.