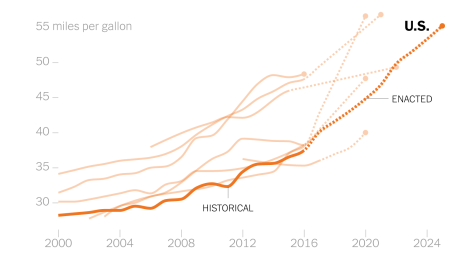 If automakers complied with the rules solely by improving the fuel economy of their engines, new cars and light trucks on the road would average more than 50 miles per gallon by 2025 (the charts here break out standards for cars and light trucks separately). But automakers in the United States have some flexibility in meeting these standards. They can, for instance, get credit for using refrigerants in vehicle air-conditioning units that contribute less to global warming, or get credit for selling more electric vehicles.

Once those credits and testing procedures are factored in, analysts expected that new cars and light trucks sold in the United States would have averaged about 36 miles per gallon on the road by 2025 under the Obama-era rules, up from about 24.7 miles per gallon in 2016. Automakers like Tesla that sold electric vehicles also would have benefited from the credit system.

Source: How U.S. Fuel Economy Standards Compare With the Rest of the World’s – The New York Times

This is one of those areas where most reporting on the CAFE standard rollback has been terrible. You tell people the new CAFE standard is 55 mpg, and they look at their SUV, and say, that’s impossible. With diesel off the table after the VW standard, only the best hybrids today are in that 55 mpg range. How could that be the average?

But it’s not, it’s 55 mpg equivalent. You get credit for lots of other things. EVs in the fleet, doing a better job on refrigerant switch over. 2025 would see a real fleet average of around 36 mpg if this was kept in place.

More importantly is that in rolling back this standard it’s going to make US car companies less competitive. The rest of the world is going here, and US not just means companies that don’t hit these marks have a shrinking global market.