Back in November we decided to stop waiting for our Tesla Model 3 (ever changing estimates) and bought a Chevy Bolt EV (which we could do right off the lot). A week later we had a level 2 charger installed at home, and a work order in for a time of use meter. Central Hudson’s current time of use peak times are just 2 – 7pm on weekdays, and everything else is considered off peak. That’s very easy to not charge during, but is it actually the optimal time to charge? Especially if you are trying to limit your CO2 footprint on the electricity? How would we find out?

The NY Independent System Operator (ISO) generates between 75% and 85% of the electricity used in the state at any given time. For the electricity they generate, they provide some very detailed views about what is going on. 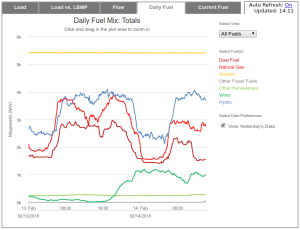 There is no public API for this data, but they do publish CSV files at 5 minute resolution on a public site that you can ingest. For current day they are updated every 5 to 20 minutes. So you can get a near real time view of the world. That shows a much more complicated mix of energy demand over the course of the day which isn’t just about avoiding the 2 – 7pm window.

With my upcoming talk at IndexConf next week on MQTT, this actually jumped up as an interesting demonstration of that. Turn these public polling data sets into an MQTT live stream. And, add some data calculation on top to calculate what the estimated CO2 emitted per kWh is currently. The entire system is written as a set of micro services on IBM Cloud running in Kubernetes.

The services are as follows:

MQTT is a light weight message protocol using a publish / subscribe server. It’s extremely popular in the Internet of Things space because of how simple the protocol is. That lets it be embedded in micro controllers like arduino.

MQTT has the advantage of being something you can just subscribe to, then take actions only when interesting information is provided. For a slow changing data stream like this, giving applications access to an open event stream means being able to start doing something more quickly. It also drastically reduces network traffic. Instead of constantly downloading and comparing CSV files, the application gets a few bytes when it’s relevant.

That’s the current instantaneous fuel mix, as well as the estimated CO2 per kWh being emitted. That’s done through a set of simplifying assumptions by looking at 2016 historic data (explained here, any better assumptions would be welcomed).

The demo app also includes an MQTT console, where you can see the messages coming in that are feeding it as well.

The code for the python applications running in the services is open source here. The code for the deploying the microservices will be open sourced in the near future after some terrible hardcoding is removed (so others can more easily replicate it).

While NY State does have variability in fuel mix, especially depending on how the wind load happens. There is a pretty good fixed point which is “finish charging by 5am”. That’s when there is a ramp up in Natural Gas infrastructure to support people waking up in the morning. Completing charging before that means the grid is largely Nuclear, Hydro, and whatever Wind is available that day, with Natural Gas filling in some gaps.

Once I got that answer, I set my departure charging schedule in my Chevy Bolt. If the car had a more dynamic charge API, you could do better, and specify charging once it flat lined at 1am, or dropped below a certain threshold.

On Feb 22nd I’ll be diving into MQTT the protocol, and applications like this one at IndexConf in San Francisco. If you’d love to discuss more about turning public data sets into public event streams with the cloud, come check it out.