One of the more thought provoking things that came out of the OpenStack leadership training at Zingerman’s last year, was the idea of the Triple Bottom Line. It’s something I continue to ponder regularly.

The Zingerman’s family of businesses definitely exist to make money, there are no apologies for that. However, it’s not their only bottom line that they measure against they’ve defined for themselves. Their full bottom line is “Great Food, Great Service, Great Finance.” In practice this means you have to ensure that all are being met, and not sacrifice the food and service just to make a buck.

If you look at Open Source through this kind of lens, a lot of trade offs that successful projects make make a lot more sense. The TBL for OpenStack would probably be something like: Code, Community, Contributors. Yes, this is about building great code, to make a great cloud, but it’s also really critical to grow the community, and mentor and grow individual contributors as well. Those contributors might stay in OpenStack, or they might go on to use their skills to help other Open Source projects be better in the future. All of these are measures of success.

This was one of the reasons we recently switch the development tooling in OpenStack (DevStack) to using systemd more natively. Not only did it solve a bunch of long standing technical issues, that had really ugly work arounds, but it also meant enhancing our contributors. Systemd and the journal are default in every new Linux environment now, so skills that our contributors gained working with DevStack would now directly transfer to any Linux environment. It would make them better Linux users in any context, not just OpenStack. It also makes the environment easier for people coming from the outside to understand, because it looks more like what they are used to.

While I don’t have enough data to back it up, it feels like this central question is really important to success in Open Source: “In order to be successful in this project you must learn X, which will be useful in these other contexts outside of the project.” X has to be small enough to be learnable, but also has to be useful in other contexts, so time invested has larger payoffs. That’s what growing a contributor looks like, they don’t just become better at your project, they become a better developer for everything they touch in the future.

In the new controlled, randomized trial involving 128 healthy young adults, researchers found that playing Lumosity brain-training games for 30-minute sessions, five times a week for 10 weeks resulted in participants getting better at playing the games. But researchers saw no changes in participants’ neural activity and no improvements in their cognitive performance beyond those seen in controls. The same went for participants who played video games not designed with cognitive benefits in mind.

To the best of any studies out there, brain training games are all snake oil. There is no such thing as general intelligence booster, there is just getting better at specific skills because you do them more.

This infographic summarizes how many people are expected to travel to the path of totality and where they will congregate. The patterns of converging lines to the path of totality represent the quickest drive paths from throughout the nation to the path. These lines are color-coded by destination state. The blue circles in the path are destinations for eclipse travelers, proportionally sized to the expected traffic impact. The black dots are metropolitan areas throughout the country scaled to population. 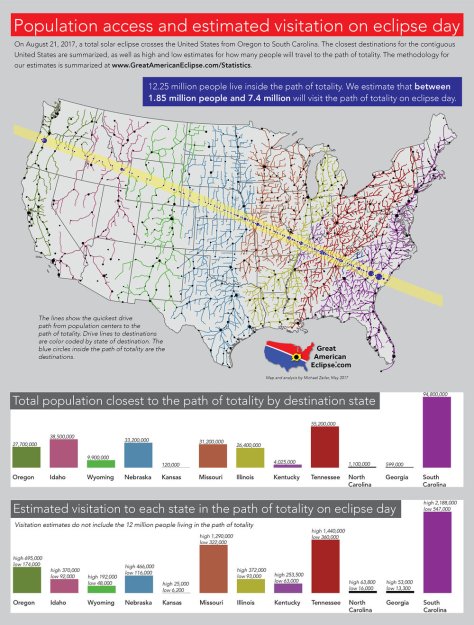 This traffic shed diagram is interesting on so many levels. You can imagine what the congestion points might be on day of with an extra 2 million people trying to get around South Carolina.

It will also be interesting as the media starts ramping up as we get closer if more folks will decide to take this plunge, or figure that they’ll be around in 7 years to catch the next one.

On Monday, August 21, 2017, a total solar eclipse will pass over the Pacific Northwest (Oregon, Idaho, Wyoming etc.). The California balancing authority area will be affected by a partial eclipse between 9:02 AM and 11:54 AM PPT. As a partial eclipse, the sun will be obscured from 76% in Northern California to 62% in Southern California border area. The reduction in solar radiation will directly affect the output of the photovoltaics (PV) generating facilities and rooftop solar. 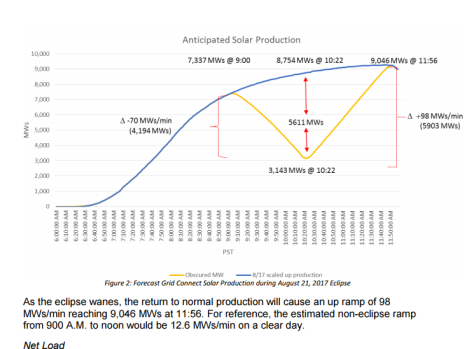 In looking up 2017 Eclipse stuff, I wondered if anyone had modeled the Solar Power generation drops during it. Of course they had, and I quickly found this California ISO report on it. California will probably be hit harder than this than most given their solar install base, so accurate modeling is really important.

I have yet to find anyone modeling wind for the event. As that definitely does pick up with the temperature shifts pretty heavily right around the event. But maybe it’s too little of an impact to notice?

I’m thrilled to be talking about the Internet of Things and Home Assistant at the OpenWest conference next week. The talk for it has come together quite nicely, and I’ll hopefully be giving it a few more places over the coming year as well. The goal of the talk is to explain some of the complexity of the space, and see why it is so complex, and why the only real path forward in the short / medium term is an open source hub at the heart of everything.

For those that can’t make it all the way to Utah, there is a trimmed down Article version of it up at opensource.com. The article seems to be doing well, and was #2 for this week on the site.

I will also be forever indebted to Benjamin Walker and his complete throw away line “this is why we can’t have the internet of nice things” during his New York After Rent series (which is really incredible, and completely unrelated to any of this), which stuck in my brain for months afterwards, and became the seed of inspiration for this talk.