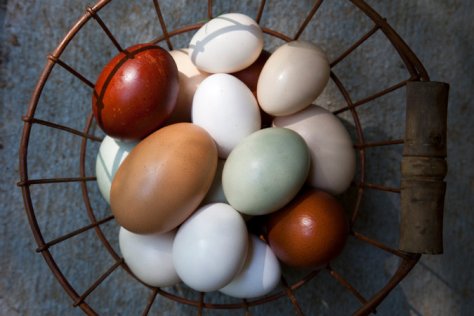 Americans love refrigeration, and eggs are high on the list of items we rush to get into the refrigerator after a trip to grocery store. Meanwhile, our culinary compatriots in Europe, Asia and other parts of world happily leave beautiful bowls of eggs on their kitchen counters.

Mostly, it’s about washing. In the U.S., egg producers with 3,000 or more laying hens must wash their eggs. Methods include using soap, enzymes or chlorine.

But — and here is the big piece of the puzzle — washing the eggs also cleans off a thin, protective cuticle devised by nature to protect bacteria from getting inside the egg in the first place. (The cuticle also helps keep moisture in the egg.)

With the cuticle gone, it is essential — and, in the United States, the law — that eggs stay chilled from the moment they are washed until you are ready to cook them. Japan also standardized a system of egg washing and refrigeration after a serious salmonella outbreak in the 1990s.

In Europe and Britain, the opposite is true. European Union regulations prohibit the washing of eggs. The idea is that preserving the protective cuticle is more important than washing the gunk off.

Source: ‘Why Do Americans Refrigerate Their Eggs?’ – The New York Time

One thought on “Why Do Americans Refrigerate Their Eggs?”