I have replaced most of the traditional lights in our house now, with a plan to purge the rest over the next couple of months. However, for new lighting in the house, I’m starting to look into LED native solutions. A good example of this is the task lighting I added to the kitchen. 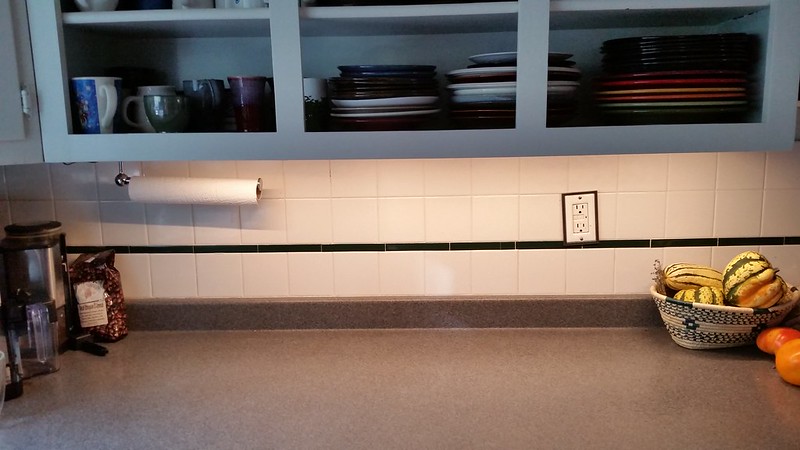 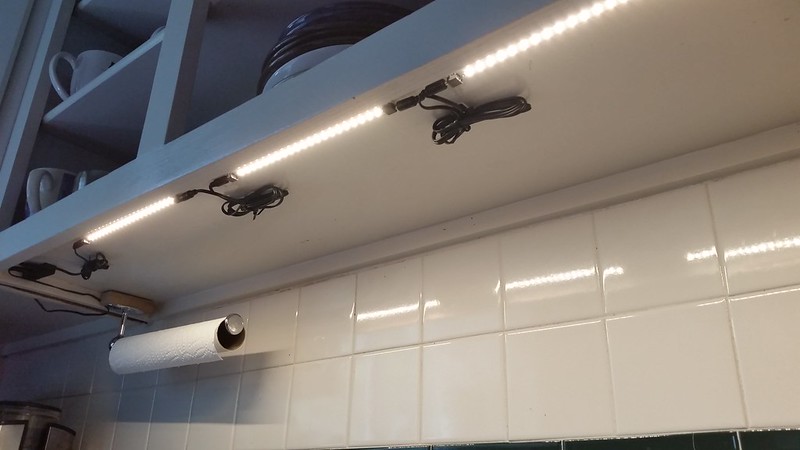 This kit provides you with 10 8″ 2700K LED bars, wiring connections for them, 2 transformers, 2 small switches. The install is very quick, and you only need a spare outlet somewhere.

Susan had been asking for counter task lighting for years, and I was basically stalling until we had an LED solution for it, which wasn’t really there 2 years ago (the last time I looked seriously). We’ve now arrived.

For our kitchen I only used half the components in the kit. The bars are bright enough that a single row is the right brightness. There are 4 under the main cabinet, and 1 that’s under a side shelf in the corner. I’m still contemplating where the rest of the kit is going to be used.

Susan and I took a flight to India for a wedding in 2008. We flew on a new 767 that had a color changing LED light kit that meant that we got simulated sunrise (deep red -> orange -> yellow) and sunset (orange -> red -> deep purple) during our flight near meals. This was amazing. My entire interest in LED lighting started with this experience, as I wanted that in my home. I have parts and experiments scattered across my electronics workbench that never quite got far enough to be useful. Now you can buy this off the shelf.

There are a few different systems out there. I bought into the Philips Hue universe for a couple of reasons. The Hue system includes a “bridge” which connects to your home network (wired only). It then communicates to up to 50 Hue devices via zigbee, which is a low powered wireless protocol that lives in the 2.4 Ghz spectrum.

They have a very open API, which means there are tons of 3rd party applications that can talk to Hue. That includes applications that do things the base system does not, like color animation (aka simulated sunset). Plus you can write your own.

They make regular A19 bulbs, unique color pods for indirect lighting, and connected light strips. They are definitely in a different price category than regular lighting, but if this is your thing, they are pretty awesome. And this was definitely awesome enough for me to spend some time and money to experiment with.

They make a scene switch for these lights which you program via smartphone app. It’s actually 4 buttons, as the whole thing clicks in. Typically 1 will be off, then 3 different configurations. For our bedroom I’ve put Hue bulbs in both of our night stand lights. 2 is roughly a 2700K full brightness. 3 lights up only Susan’s light on the lowest reddest bulb setting. This is to give her just enough light for nighttime feedings for Arwen, with hopefully the ability to get back to sleep after. 4 is currently a mellow orange light, just because.

Basic soft white light Note the hallway light difference from the prior, this is actually extremely dim, and the camera is compensating with much higher iso.

What’s super cool is once you have a few of these you start thinking about the lighting in your house in a different way. We can set the lights to a very low level while watching TV, so you can still see in the room, but it doesn’t impact the watching experience. I’m leaving the living room ones on at the lowest red level.

Note – not quite RGB after all:

One last thing I discovered on Hue is that the A19 Bulbs actually live in a different color space than the “Friends of Hue” gear like the Iris or Light Strips. The bulbs are optimized for nicer whites so they can act like normal bulbs. Which means they can’t do a super deep red, and don’t do cyan at all. The Friends of Hue are optimized for color control, which means their whites are a little odd, but their deep colors are really straight on. So depending on whether you’ll be using this more as normal lights, or more in color accents, choose accordingly.

The Future of Lighting

I’ve been listening to BBC’s History of the World in 100 objects, which has made me think a bunch about long term evolution of objects.

The history of light is a curious thing. It’s kind of amazing to think that the way we got light in the 20th century is to run so much current through a wire that it heats to the point that it glows white. Then put it in an evacuated glass sphere to prevent it from igniting. Fluorescent lights use a bit more physics, but are equally baroque.

But LEDs are extremely malleable. They come in all kinds of shapes and sizes. Honestly, it wouldn’t surprise me if the ceiling fixture standard we know today becomes a thing of the past. To my daughter the light bulb will probably be the same way I think if vinyl records, a thing that I saw as a kid, felt nostalgic about, and now have no place for in my life.

My journey experimenting in this space has just begun. I’ll continue to write about some of this in the future. But hopefully this primer has been useful in providing a base line to let others explore the space as well.

Exactly how much taxpayer money did go into the now-famous shrimp treadmill? The treadmill was, in fact, made from spare parts—an old truck inner tube was used for the tread, the bearings were borrowed from a skateboard, and a used pump motor was salvaged to power the treadmill. The total price for the highly publicized icon of wasteful government research spending? Less than $50. All of which I paid for out of my own pocket.

via How a $47 Shrimp Treadmill Became a $3-Million Political Plaything – The Conversation – Blogs – The Chronicle of Higher Education.

From the intersection of science and politics. Kind of like Ebola no longer being a thing everyone is freaking out about now that we’re past the midterm elections.

On Muppets & Merchandise: How Jim Henson Turned His Art into a Business | Longreads Blog.

Honestly, I can never quite read enough about Jim Henson. It’s kind of amazing that he both did IBM corporate meeting videos, created the most iconic childrens television, and created a studio that went on to make one of my favorite science fiction series well after he passed on.

This article looks at his balancing act between Art and Business in getting established.

In 4 hrs we’ll know if we managed to shoot a probe into space and harpoon and land on a comet successfully. Even if the landing is not a success, the images coming back from the inbound are amazing. The above picture is from 10km from the NavCam on the probe.

This is what a comet looks like on it’s surface. Truly amazing.