Note: background on lighting and motivation for this is in Part 1. If A19 or 800 Lumens means nothing to you, I suggest you read that first. Also, all links to products go to my Amazon affiliate referral code. So if you buy anything through this page I’ll get a small kick back. If you find this useful please feel free to do that.

In only the last 12 months things have dramatically accelerated in the consumer LED space, so for a bunch of lighting situations LED replacements is a firmly solved problem. I did a ton of reading on Amazon about various options, but did my first round of purchasing at Home Depot so that I could return items easily if they didn’t work out. I also bought a variety of different kinds of bulbs from different vendors, so I could figure out favorites for future purchases.

The top 2 vendors in LED replacement bulbs for incandescent or CFL appear to be Philips (who’s been in lighting for ever) and CREE (an LED component company that grew up into this market). Philips and CREE hold the largest shelf space at Home Depot, and my understanding is that CREE has some sort of exclusive with Home Depot, which is probably part of it. While powering LEDs is simple, LEDs are directional by nature, so a huge part of the design is actually efficiently diffusing the light into 360 degress.

Philips was in this game before anyone else, and has produced many different iterations of LED replacement bulbs. They were the winner of the L Prize for a 60W replacement. The precursor to that winning bulb was available for retail sale, and ran about $35 / bulb (when not on sale). I have a few of those because the CFL slow start was driving me nuts in our hallway and kitchen. 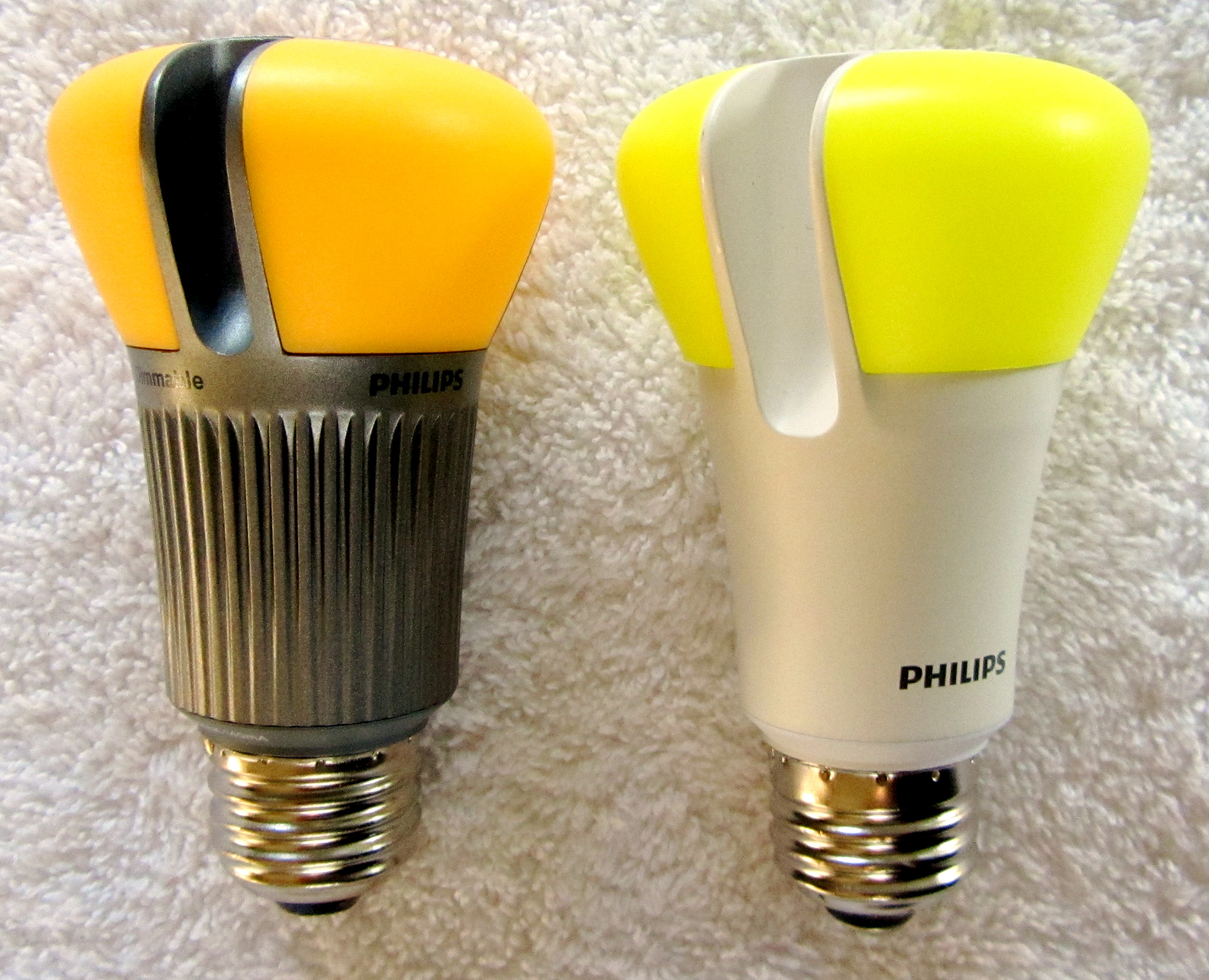 “Philips LED bulbs” by Geoffrey.landis – https://en.wikipedia.org/wiki/File:Philips_LED_bulbs.jpg. Licensed under CC BY 3.0 via Wikimedia Commons. The bulb on the left was the first widely available commercial LED 60W replacement. The one on the right was the winner of the L Prize for 60W replacement.

It is clear from the bulbs Philips is continuing to produce that they’ve got a heck of a design team that’s into trying new things (which is paying off).

CREE was a new comer to this market, and entered from below, previously just being a parts maker. It seems that CREE has basically figured out one physical design, and is sticking with that. They are putting their innovation into driving cost down, and energy consumption. A Philips 800 Lumen bulb (60W equiv) will be ~10W, a CREE at the same luminosity will run at ~9W.

CREE entering the market definitely put price pressure on Philips and helped open up this whole market. Competition here has been really good for consumers and means that you can now get an 800 Lumen dimmable bulb for less than $10. I got some for $7 at Home Depot. While still more expensive than incandescent, remember, we’re talking about 20 year life on these things, so the amortized cost is actually pretty low.

The A19 (aka Regular Bulbs) story

The A19 space is a completely solved problem. You have a ton of options, they’ll all work quite well. I have 3 models of Philips in the house, and a bunch of CREE. They all act and look quite similarly.

If you were to only get one bulb, and start replacing 60W lights through the house get the Philips SlimStyle 800 Lumen 2700K bulb. This is Philips newest design, in which they figured out how to get 360 degree light diffusion without frosted glass. Which means this is 100% plastic, so dropping it, probably not an issue. It’s also one of the most inexpensive bulbs on the market. Amazon pricing is currently ~$8, I got them for $7 at Home Depot on some sale they were running.

When lit up and complete bare they look like this: 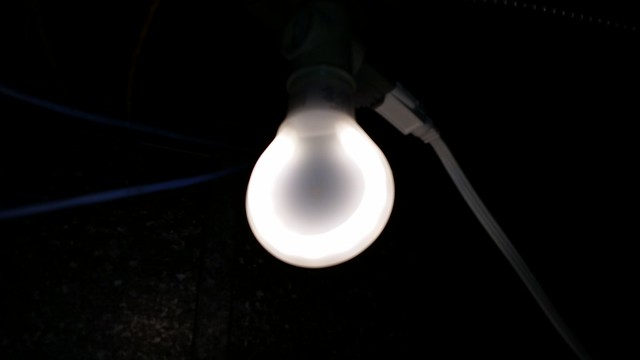 However the light spread is unidirectional. So either as bare bulb, or in a fixture, these will act as you expect. They are dimmable, but they aren’t the best dimmable performance out there. 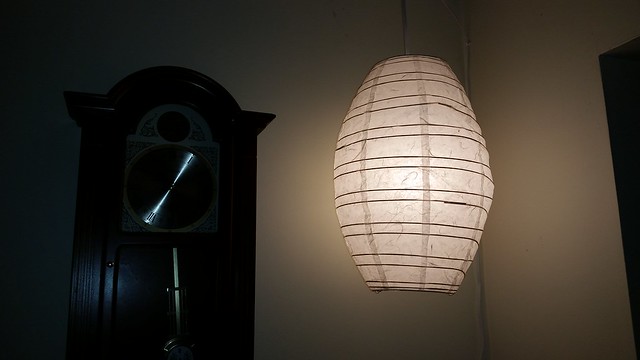 SlimStyle in a paper lantern, notice you don’t see the donut.

The reasons to not get this bulb is if you need something brighter (the 800 Lumen bulb is the brightest they make in this design) or if you are going to dim them.

If putting bulbs in a dimmer, my current favorite is the Philips 429258.

This is actually an 880 Lumen bulb, so a little brighter. This got the best reviews for dimmable bulbs in a bunch of places, and I’m pretty happy with the results. 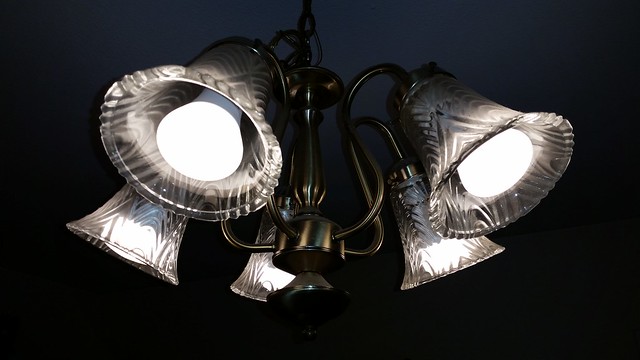 LED bulbs don’t dim all the way down like incandescents do, I think because at the lowest level they are driving so little current it’s not enough to activate anything. So realize you’ll only get down to 15% luminosity, then it goes off.

I did find this bulbs slightly more blue than I expected for 2700K, but our other lights are also all going through shades which yellow it even more. I think if we want to warm up that room the answer is really change the paint on the walls.

Also note, unlike the SlimStyle, this is frosted glass on the outside to get the diffusion. So if you drop it, it could break. It feels pretty rugged so I’m sure it will take more abuse than a CFL or incandescent.

When I started barreling down this path Susan mentioned she’d actually like 3 way bulbs in the 3 lamps in the house that support it. As a kid growing up I think I only ever saw a three way bulb once, so it wasn’t even on my radar.

Both Philips and CREE make them, however the CREE’s click 1 is dimmer (340 Lumens vs. 470 Lumens on the Philips). So CREE 3 Way LED is my pick here. The three we installed work great, and it means we have a ton more control over lighting in the living room.

Like the Philips 429258, this is glass on the outside, so this could crack if dropped.

I have a few places where I want higher lumen bulbs. I mostly filled this with CREE largely because they were a little cheaper than Philips, and the 100W equiv bulbs were out when I was at Home Depot. So far they’ve been fine.

One of the nice things of the 75W equiv bulb is that it’s still an A19 that uses 13.5W. Which means if you have a fixture that said max bulb was 60W, you can use one of these in it to make it brighter than it’s ever been.

The 100W equiv is actually an A21 shape, so a 1/4 inch bigger around. All the 100W equivs (Philips and CREE) state they are not suitable for enclosed fixtures, though given their power distribution I’m not entirely sure why.

Beyond the E26/A19 lights in the house, I also have some track lights (not on dimmers) which take R20, and our range hood which takes PAR20. Honestly, I always confuse these 2, so realize PAR20 is the shorter one.

The R20 bulbs are also pretty much a solved problem. Philips has plenty of bulbs in this realm. I think I got some Feit brand for a couple of these, but doing it again I’d get these – Philips 423400.

The PAR20 bulbs are still kind of a work in progress. I got the Philips bulb that was on the shelf at Home Depot, but it turns out it was actually a 3000K 25 Degree beam bulb. So the results weren’t quite what I hoped. 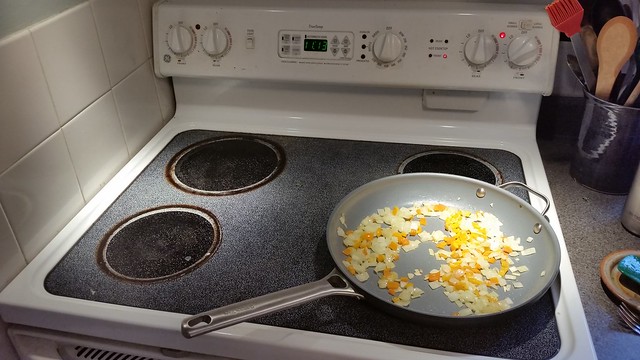 On further research I should have bought the Philips  426155 which is 2700K and a 36 degree beam spread. Amazon primed. Will have them Tuesday.

But that was the only big mistake I feel that I made during my purchasing, so I’m ok with that.

We have a GE refrigerator that takes an A15/E26 bulb in both the fridge and the freezer. It turns out this was actually a 60W incandescent. As I ranted a few days ago, this mean the top shelf of my refrigerator was basically an easy bake oven. This is not what you want.

Neither Philips or CREE are in this space. So I ended up with an off brand bulb A15 40W equiv bulb that was on the shelf at Home Depot. I’m ordering this Feit Electric A15 bulb to do the same replacement for the freezer.

Replacing the refrigerator door light with an LED is probably the biggest win I’m going to get out of this. The refrigerator is running noticeably less often now, and the top shelf is cool to the touch even if you loiter with the door open for a while.

If you do nothing else, figure out how to replace your refrigerator bulb with an LED as soon as you can. Your life will get noticeably better after doing it.

In general, I’m not going to buy more Feit bulbs unless I have to. Not because their bulbs are bad, but their packaging is completely out of control.

All the Philips and CREE packaging is recyclable (cardboard + PET (#1) plastic). Feit is not. And their R20 packaging is the terrible extra tamper proof kind that you have to cut apart with a box cutter, create a ragged edge of plastic, which you then cut yourself on. Basically everything that Amazon’s frustration free packaging was designed to fight. And it’s made of a non recyclable plastic. Boo Feit.

The other caveat is that the rule that bulbs don’t hum ends up being violated when they are in a dimmer. It’s arguably still less than CFLs do in a standard light socket, but if you have sensitive ears (and haven’t lost your high end range) you can hear if it you try.

I think I have 2 more parts in me, though they’ll come a bit later. One on what to do with florescent tube lights, and one on LED native lighting and the future of home lighting.

As always, if you have corrections or comments, please leave them in the blog. Once all these posts are done I’ll string them together a bit better, and will definitely update with any corrections.