Note: this is in reference to the Generation 1 X1 Carbon which was available in 2012/2013. The new Gen 2 X1 Carbon has enough different hardware that this may not apply.

The Thinkpad X1 Carbon is Lenovo’s stab into the ultrabook market. Made of carbon fiber (hence the name), it’s very light. The last 6 months with my Samsung chromebook has made me appreciate lightness when it comes to laptops.

I’d been lusting after one of these for the last year. I decided with new job it was time to treat myself to one for my personal laptop.

First off, this is about the best experience I’ve had with a Linux machine. Everything works, and is completely rock solid. It showed up right before Christmas, I did an Ubuntu install with full disk encryption, then went about restoring my 50G home directory onto it (which takes a few hours even over ethernet).

The hardware is an i5 with Intel graphics. Over the years I had gotten so used to nvidia graphics, which are fast, but fail to suspend on about day 4. Which was typically fine, because they were work machines and Lotus Notes would crash Unity around day 3 anyway, so a restart was in order. But with Intel graphics this has been rock solid. I’m on my 3rd boot since I got it (did actually decide to take a kernel update the other day), with me suspend / resuming on average 6 times a day. Never an issue. Oh right, this is how a laptop is supposed to work. 🙂

Everything I’ve tried so far as worked fine. Displayport is fine, fingerprint reader has a pam module, which I used for about a week, then found it was requiring a few more swipes than I liked, so uninstalled it.

Battery life is consistently 5 – 6 hours. So my charger stays in my office, the laptop rarely does. What’s even better is it’s a new kind of battery tech which means it does a fast charge to 80+% in < 45 minutes. So when I’m actually down to less than an hour of battery I’ll take it up to the office, and call it a break (or jump on my desktop).

It’s still the generation that has real mouse buttons, which are actually now a think of the past, and a contributing reason to getting this versus a newer thinkpad.

Realize, I’m about as invested in Thinkpad keyboards as anyone. My desktop keyboard is the USB Thinkpad keyboard, and I just ordered 2 more of them as backups given that it’s a discontinued item.

1600×900 at 14″ is respectable. Importantly, it’s a matte screen, which means it’s usable around bright lights. It’s not a great screen, especially compared to what I’m using on my desktop, however it’s a comfortable one to work on. There are versions with touch screens, which would add weight and gloss, neither of which I was interested in.

The X1 carbon came out about a year ago, so it’s an i5 2 core processor. Ram is 8G max (it’s soldered on, so you want to get the max). SSD maxes out at 256G. It’s field replaceable, but not in a standard package, so max that out as well.

In an ideal world

This would have a better screen, and I could get it with speed and feed bump in the underlying hardware. That being said, I’ve got a nice new Haswell desktop with a ton of memory and SSD. This laptop is a joy to use, so I’m ok with slightly less speed on it. I did build a powerful workstation 6 months ago for a reason.

And then Lenovo went all Crazy Pants

At CES they announced a new X1 carbon. Faster processor, better screen… and a completely scrambled keyboard. No more function keys, instead a capacitive “touch region” . Caps lock removed and turned into a split home / end key. Tilda key moved over to between the right Alt & Ctrl keys. It also removes the mouse keys, which makes the touchpad non disableable. Complete crazy pants. 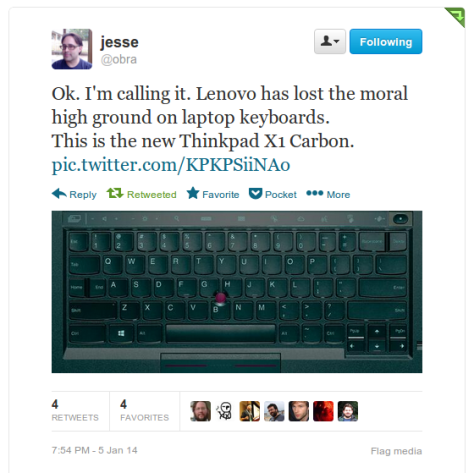 Which blows my mind. When Lenovo got the Thinkpad franchise, they got a keyboard design which was loved by millions. There were reasons why they needed to touch the keyboard once, because the old one won’t fit in an ultra book. It takes up too much depth. However the level of scrambling they are doing to it now is just out of control. It makes me sad.

But back to Linux…

As a Linux laptop, this is a joy. This generation of X1 carbon is going to disappear soon with the big windows 8 push on their new version. So if you were ever thinking about it, now is the time to act.